Dutch innovator, Theo Jansen has achieved worldwide fame for his Strandbeest (beach beasts), wondrous new life-forms that blend engineering, biomechanics and art – and take the concept of kinetic sculpture to its peak.

The Strandbeest look so organic and real that from a distance they are mistaken for the skeletons of dinosaurs. Standing up to ten metres tall, these curious creatures are made from basic materials and have no need for motors or technological aids of any kind; they simply come to life through the force of the wind.

After dropping out of a Physics degree at the University of Delft, Theo took up painting and then developed an interest in robotics and aeronautics. In the early 80s, he began creating algorithmic simulation programs for artificial life, and the Strandbeest were conceived.

Theo’s work has been exhibited at some of the most prestigious museums in the world and among his many awards is the Special Jury Prize in Ars Electronica 2005; however, he still pursues a dream: to enable his creatures to survive and think on their own. 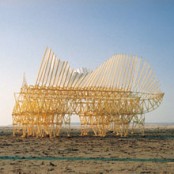 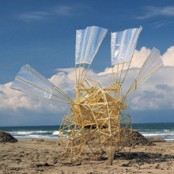 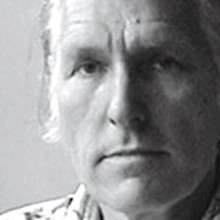