Described as a ‘typographic evangelist’, Australian typographer, writer and lecturer Stephen Banham is founder of the Melbourne-based design studio Letterbox, which focuses on typographic applications, primarily in identity, publishing and signage systems, mostly for clients in the arts and cultural sectors. His work is extensively published and exhibited.

Born in Melbourne in 1968, Stephen completed a BA in Visual Communication at RMIT University in 1988, and proceeded to receive a Master of Design in Design Research in RMIT at 2003. He has been a lecturer of typography since 1990.

In 1991, he published his first issue of Qwerty, one of six experimental spiral-bound issues, which was published in Eye Magazine in 2002. Stephen founded Letterbox as a micro-foundry in 1996, producing or collaborating on typefaces such as Berber, Terital and Kevlar, Morice, Gordon, Brunswick Black and more.

Stephen has since contributed to many design publications, such as Typo, Eye, Desktop, Grafik and others. He is focused on bring a greater social awareness of typography to the larger public, and has done so on platforms such as the Age and the Australian newspapers.

Stephen has presented at design events in New York, Lebanon, Qatar, New Zealand, England, Spain and Australia, and was inducted into the International Society of Typographic Designers in 2011. 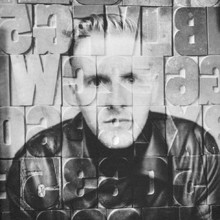