Paula Scher is one of the world’s most acclaimed graphic designers.

She began her design career as a record cover art director at Atlantic Records and CBS Records in the 1970s and 1980s. She has been a principal in the New York office of the distinguished international design consultancy Pentagram since 1991.

She has designed identity and branding systems for a wide range of clients including the Public Theater, Citibank, the Museum of Modern Art, The Metropolitan Opera, the High Line, and the Philadelphia Museum of Art.

Scher has served on the Design Commission of the City of New York since 2006. She is an established artist exhibiting worldwide, and her work is in the permanent collections of the Museum of Modern Art and other institutions. 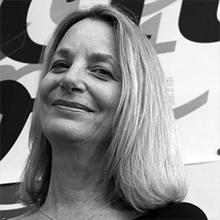