Melbourne-based illustrator Oslo Davis is fast approaching cult status for his droll cartoons that depict the absurd, the mundane and the irritating, with hilarious results.

Usually rendered in simple black line and sometimes watercolour, Oslo’s works are anchored in the minutiae and machinations of daily existence. He draws regularly for The Age, Meanjin, Readings Monthly and the Wheeler Centre. His work also occasionally appears in The Big Issue, the Sleepers Almanacs, Tango, Bicycle Victoria’s ‘Ride On’ magazine, Going Down Swinging and Torpedo. A collection of Oslo’s weekly Sunday Age cartoons, titled ‘Overheard’, was recently published through Arcade Publications.

Oslo is represented by the independent Australian illustration agency, the Jacky Winter Group, through which he has worked for The New York Times, BusinessWeek, Saatchi & Saatchi and The Glue Society. He has also completed a number of book cover illustrations for Melbourne University Publishing and Picador.

In 2010 Oslo was awarded a creative fellowship to undertake a residency at the State Library of Victoria, perusing the magazine and ephemera collection as the basis for a new collection of sketches and drawings. 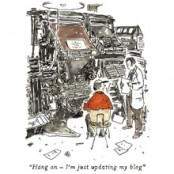 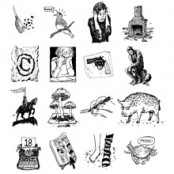 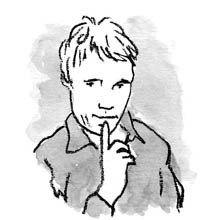