Kelo was born in a small village near the town of Zeerust in South Africa. She graduated with a Bachelor of Commerce degree in Finance and a post-graduate degree in Business Administration from the University of Natal before training as a banker.

After several years in banking, Kelo moved to Germany to further her studies in management and marketing. In 1997 she returned to South Africa focused her attention on development.

She worked for a number of development agencies including Friedrich Naumann Foundation and terre des homes Germany.
Her portfolio covered projects the SADC region focusing on children, SME’s and human rights.
In 2003, Kelo co-founded branding and design agency Gamatong Design Enterprise focusing primarily on brand strategy, development and design. Some of the brands she has worked on include Coca-Cola, Moshito Music Conference, SAB, House of Mandela, TED and a number of small and medium enterprises.

Since 2007, Kelo has been a regular delegate to TED Conferences. She was a TED Fellow at TEDGlobal 2007 and she is the organizer of TEDxSoweto and TEDxJohannesburg. She is also TEDxAmbassador for Africa and a member of the Mandela Poster Project Collective. 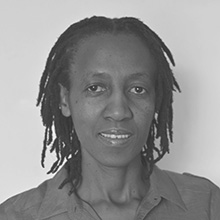