Gemma caught the eye of the design world when, under the alias Mrs Eaves, she launched her blog ‘For the Love of Type’, which continues to showcase her skills and interests.

But the game changer was an experimental video in which she artfully inscribed her body with hand lettering; it gained wide attention and earned her an invitation to speak at the 2009 Typo Berlin design conference, which opened other doors.

Gemma has exhibited in shows at Gallery Eight, Somedays, Object Gallery, Lo-Fi Collective, Gaffa Gallery, He Made She Made and The Paper Mill, and her work has been published in books and magazines including Grafik, Graphic Design Referenced, Just My Type, Hand to Type, Form Magazine, Frankie and Slanted Magazine.

More recently, Gemma has presented at creative conferences in Sydney, Brisbane and Perth. Gemma’s unbridled enthusiasm for type and its potential is expressed through her ongoing experiments with hand lettering, endeavours to develop a commercial font and contemplations of type from a cultural point of view. 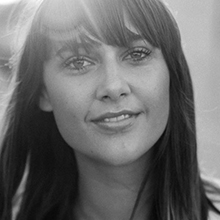