One of Austria’s most talented and awarded designers and educators, Cordula Alessandri is well known for her distinctive work in packaging, corporate identity, wine and food labels, annual reports, publications and websites.

Cordula attended the University of Applied Arts in Vienna, from 1978 to 1982 , where she majored in graphic design, with Professor Herbert Schwarz, winning the award for top student. After university she went on to complete a further three years of study with typography mentor Professor Joey Badian.

Cordula was the first woman in Austria to be appointed an Art Director at DDB Needham
Worldwide, Vienna, at the age of 24.

Cordula has taught Communication Design at the University of Arts in Saarbrücken, Germany, and is regularly invited to serve on design competition juries and give lectures and presentations, in which she focuses on concepts such as ‘sense and sensuality in design’. Cordula became a member of Alliance Graphique Internationale in 2003. 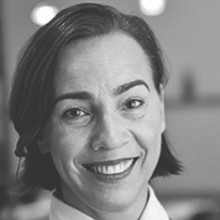